Why Don't I
Miss The Game?
THURSDAY, JULY 9, 1981 -- Today marks the first month of what some call the most serious threat to our American way of life since Prohibition.

I refer, of course, to the infamous baseball strike. Among other things, it has brought home the tedium and tensions of leisure time unrelieved in the warm-weather months by the cry of “Play ball!” Gone is the guarantee of mindless hours at the ball park--or television set or radio--with a beer in hand.

This morning, on CBS all-news radio, commentator Jeff Greenfield suggested to Charles Osgood that the president invoke the Taft-Hartley Act. Greenfield’s thesis was that the baseball walkout indeed constitutes an emergency, that it is a threat to our national security. He obviously felt that Mr. Reagan has the authority and the proper patriotic gumption to invoke the mandatory 80-day cooling-off period.

I don’t know if our leader will rise to this proposed bait, but as for me, who cares! For someone weaned on baseball, who grew into and out of his teens on the fantasies engendered by Brooklyn’s “Boys of Summer,” who still debates Joe DiMaggio vs. Willie Mays vs. Duke Snider, who still empathizes with Ralph Branca, I find myself strangely indifferent to the silent stadium and the mute tube.

I’m not absolutely sure why I feel no pain. I’ve yet to undergo a total analysis, but I do have some clues.

To a ferocious New York Met fan (and also a pragmatist), the strike must be considered a blessing. Five errors in a game, three consecutive bobbles by the third baseman, leading the majors in men left on base. The frustrations are legion for those of us who cheered Seaver, Koosman and Matlack. Beyond that, I hold no particular brief for the players. They’ve gotten too much too soon and this strike honors greed rather than need. 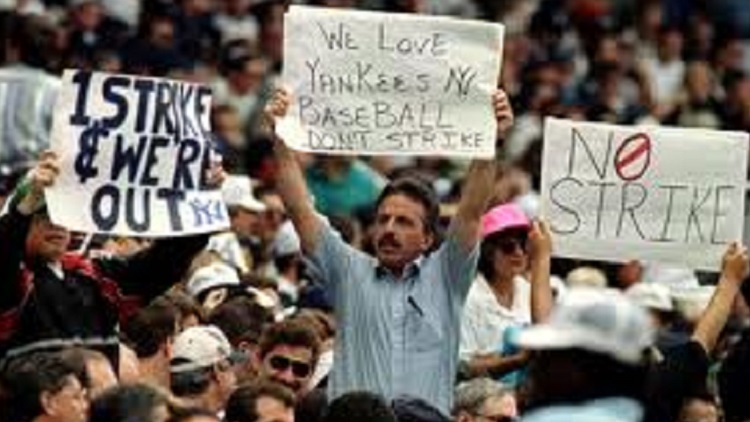 I’m no great fan of the owners, either. They’ve brought this player militancy on themselves by emptying their promiscuous wallets supposedly in search of superstars. Not only has the Holy Grail evaded most of them--only one of the twenty-six teams can win the World Series in a given year--but free-agent competition has predictably led to the outrageous compensation packages for demonstrably mediocre talent. I was genuinely shocked when the Mets (happily) lost a second-rate journeyman to another club for a multiyear pact of reportedly $600,000 a year.

This strike has settled, once and for all, the moribund myth that baseball is a sport, that it deserves special anti-trust considerations, that the interest of the fans are of any concern to either owners or players.

Hopefully, efforts by the Reagan administration to persuade Congress to abolish baseball’s anti-trust immunity will succeed. Neither the owners nor the players really seem to care about The Game. All that’s out there is the money, and it’s wearing thin.

The time is ripe for sports fans to revolt, to call a halt to rip-off gate prices in most spectator games (Baseball has been an exception; tickets remain reasonably priced.). There is a distinct danger that disenchantment is just around the corner, fueled by too many games, by too much hype, by overkill. This is compounded by sky-high salary demands on the part of athletes; by the growing number of dilettantes and prima donnas; by the violence in hockey; the foul behavior of a few tennis pros; the controversial refereeing on football and basketball; the price of wilted, soggy hot dogs and lukewarm beer; the cynicism of the sporting scene.

Declining productivity is not only a nationwide problem; it also seems to afflict the diamond and other sports arenas a well. Do I sound like an angry and frustrated fan? You bet your sweet ...

And I note this in baseball's confused context: Dave Winfield can earn up to $24 million over ten years yet the Chicago Cubs were sold for $20.5 million.

Maybe we ought to stay home when and if the season resumes.

A 2020 UPDATE
The 1981 strike, the second in baseball history to affect major league games, began June 12 and wasn't settled until July 31. About a third of the season was washed away. The 1981 season resumed on August 9. A complicated first half/second half playoff series was devised. There have been three subsequent strikes or lockouts. Dave Winfield retired in 1996. The Chicago Cubs were most recently sold in 2009 for a price of $845 million. Martin Deutsch still listens to baseball and roots for the Mets.