Book Nook: Ghost Ships, Old Spies, Marches and Manhunts
THURSDAY, APRIL 23, 2020 -- It's okay to admit that you're running out of things to do at home. If you've already run through my 2020 reading list, may I suggest these compelling reads? 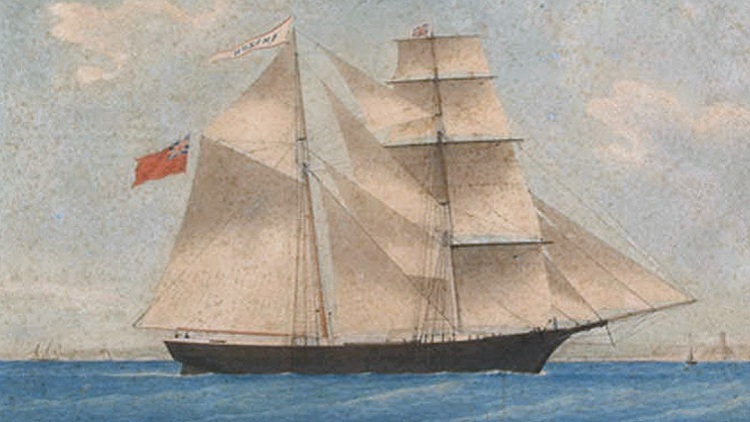 A SHIP ADRIFT
Ghost Ship: The Mysterious True Story of the Mary Celeste and Her Missing Crew may put some wind in your sails as you stay locked down. Written by Brian Hicks, it's a puzzling tale of the open seas that dates back to 1872 and is finally resolved, the author believes, only with the publication of his 2004 theory.

As the great sailing ships began to bow to the inevitability of steamships, the two-masted Mary Celeste starts from New York Harbor for Europe under the command of Captain Benjamin Spooner Briggs, an experienced Atlantic skipper, Also aboard are Briggs' young wife, their baby and a crew of seven sailors. Several weeks later, another merchant ship, the Dei Gratia, also under the command of an American captain, spots the Mary Celeste drifting aimlessly off the coast of Portugal. The Dei Gratia captain sends three of his men to investigate. They find no one aboard even though the Mary Celeste appears to be in good shape, her cargo of industrial alcohol virtually intact and the rough-weather gear of the crew still on board. Several members of the Dei Gratia crew bring the ghostly Mary Celeste into the British port of Gibraltar under recognized salvage laws. That action launched a long and bitter court hearing and more than a hundred years of speculation and theories involving foul play and the supernatural.

Published in 2004, Ghost Ship is well-researched and well-written and holds your interest throughout the entire 305-page journey. Hicks even comes up with a convincing conclusion to the mystery. Ghost Ship reads like a suspense novel and you really become anxious to find out how it all ends.

CIVIL WAR SPECIALS
If Ghost Ship reads like a novel, two Civil War novels shed light on factual events during the nation's most trying time. Manhunt by James L. Swanson is a gripping account of the 12 days it took to capture John Wilkes Booth, the assassin of Abraham Lincoln. And E. L. Doctorow's splendid work, The March, covers General Sherman's famous campaigns in Georgia and South Carolina, which helped hasten the end of the Civil War.

OAKES' EXIT
The late Conservative pundit William F. Buckley Jr. was best known as the founder of National Review magazine and the host of Firing Line, the PBS public affairs show. But he was also a novelist, creator of the Blackford Oakes CIA stories. Last Call for Blackford Oakes is exactly that: the last of 11 Buckley wrote about his spy. It's sort of sad to think that this 2005 work, where the hero spars with real-life spy Kim Philby, was the last appearance of Mr. Oakes. Saving The Queen, which launched this entertaining and often intelligent series, first appeared in 1976. It seems almost like yesterday.

MY FIRST EXPOSURE TO FURST
I first discovered the author Allen Furst in 2007 and have been a big fan ever since. His newest novel is on my 2020 reading list. As I explained several years ago, Furst writes spy novels that are generally set in Europe during the late 1930s and early 1940s. Built on a factual framework of actual events, these stories involve low-key protagonists in highly sensitive espionage operations. His 2006 bestseller, Foreign Correspondent, takes place mainly in prewar Paris, but involves a daring project to expand the distribution of an anti-fascist newspaper in Italy. It's an absorbing tale, as is every one of Furst's stories, all of which are well-researched, well-written and well worth reading.

A SECOND HELPING OF FURST
Furst also edited a spy collection of note. Published in 2003, this delightful potpourri is called The Book of Spies, An Anthology of Literary Espionage. These tempting tidbits of intrigue will convince even the most indifferent readers to find some of these books and read them in full. Even a longtime addict of this category like yours truly has been motivated to re-read what Furst sampled and selected, including work by Eric Ambler, John le Carré, Rebecca West and Anthony Burgess. Each excerpt is preceded by a short introduction from Furst, who sets the stage in a concise and informed manner.