David McCullough:
American Storyteller
THURSDAY, AUGUST 11, 2022 -- The popular, Pulitzer-winning historian David McCullough died over the weekend and America has lost one of its greatest storytellers.

Over the years I've read a substantial part of the 89-year-old's prodigious output and you can't help but be impressed by his breadth of interests. He wrote passionately about weather (1968's The Johnstown Flood, his first book) and inanimate objects (1972's The Great Bridge about the Brooklyn Bridge); about men who blazed paths on the new continent (2019's The Pioneers) and in the skies over it (2015's The Wright Brothers); about epic man-made creations (1977's The Path Between the Seas about the Panama Canal) and epic men (2011's The Greater Journey about 19th-century Americans in Paris); and about the founding fathers (2001's John Adams) and impactful presidents (1992's Truman). 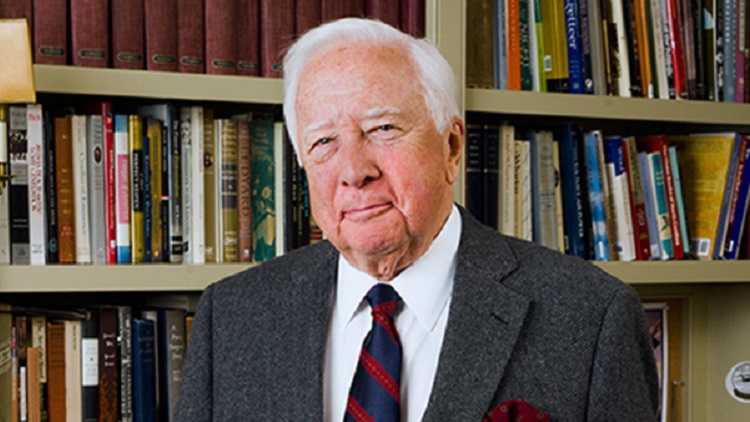 I admired the air of accuracy that Mr. McCullough brought to his histories and biographies. You get the feeling of being told the truth by a man who has done all the homework and plenty of original legwork. And even when he was opposed to a set of circumstances or a person of interest, he was always generous and even-handed about the subjects. Most notably, he brought a veneer of freshness to difficult and overlooked topics. One case in point: His chilling yet entertaining coverage of treasonous, empire-building Aaron Burr, vividly sketched in one chapter of The Pioneers.

With this summer of discontent disrupting our travel--the delays and cancellations have been the stuff of a McCullough tableau--you will have plenty of time to read while waiting for a flight. Might I suggest you sample one or all of the McCullough works reviewed below? It will surely be the most entertaining diversion you experience this season.

THE WRIGHT STUFF
In The Wright Brothers, McCullough turns his talents to chronicling the exploits of the Dayton, Ohio, bicycle-shop mechanics Wilbur and Orville. Fascinated by flight, the brothers gorged themselves on its lore and literature. Years of research and experimentation eventually resulted in their very short (12 seconds and 120 feet) but spectacularly successful flight at Kitty Hawk on a remote beach in the Outer Banks of North Carolina. This brief foray into the winter skies on December 17, 1903, changed the world as we knew it. It served as dramatic proof that heavier-than-air machines could conquer the physical obstacles that had heretofore frustrated mankind through the ages. The long road to Kitty Hawk and beyond is filled with adventures, misadventures, tragedy and the inevitable suspense that keeps you wondering if--and when--they are going to fly. McCullough's genius is in making the later battles--over recognition, patents and other legalities--equally gripping.

PIONEERS OF THE AMERICAN WEST
McCullough's final opus, The Pioneers: The Heroic Story of the Settlers Who Brought the American Ideal West, had been on my to-read list for quite a while. And after a somewhat lackluster opening chapter, I found I liked Pioneers better than I thought I would. It spotlights the courageous and adventurous men who left their homes in 1787 to develop the fertile lands around the Ohio River and create a tight-knit community based on shared values. Their story is important because Ohio has always been a crucial state and the founding of Marietta was the settlement that spurred the creation of colonies elsewhere in the West. McCullough portrays settlers as a brave, idealistic and hardworking group with a shared sense of duty. They differed from conservative folks who remained at home in New England and did not understand the westward movement. Per McCullough, those moving West were looking forward. Those staying in the East were stuck in the American past.

THE TITAN AFTER FDR
The 1,120-page Truman is fascinating from beginning to end. It covers then-Senator Harry Truman's bizarre nomination to the vice presidency in 1944; his decision as president in 1945 to use the atomic bomb; the Berlin airlift in 1948; the removal of General Douglas MacArthur in 1951; and many other highlights. But McCullough's masterwork, which earned him one of his two Pulitzer Prizes. leaves an interesting question unanswered: Why was Dwight Eisenhower so icy to Truman during Ike's eight years in office? A farmer, courageous artillery captain on the front lines in France during World War I and a failed haberdasher, Truman eventually became a politician in Kansas City's mighty Pendergast machine. That brought him to the Senate, yet Truman barely knew Roosevelt when he was nominated as his vice president. His distant relationship with FDR continued even after the election victory and until FDR's death in April, 1945.

FOUNDING FATHER, CONFOUNDING PRESIDENT
The first book I read by McCullough was his Pulitzer Prize-winning 2001 biography of John Adams. Largely overlooked among the founding fathers until McCullough's thorough treatment, Adams had the unenviable task of replacing George Washington as the nation's second president. As explained in this 752-page work, Adams' single term was contentious, often frustrating and unfortunately noted for the Alien and Sedition Acts. They set the precedent for punitive immigration laws and criminalizing negative comments about the federal government. John Adams was McCullough's third presidential biography and was turned into an acclaimed 2008 mini-series that now streams on HBO Max.